WORDS Zhou Mei An PHOTOS Contributed by MINDEF
Hungry for challenge, activity and excitement every day? The Republic of Singapore Air Force promises all these and more in a meaningful career defending our skies.

Above: Lieutenant Colonel (LTC) Conran Chia, who was awarded the SAF Overseas Scholarship in 2008, pursued a Bachelor of Science (Honours) in Economics, University College London and Master of Arts in War Studies, King's College London. He is currently attending the Indonesian Command and Staff College and was previously a Branch Head in the Air Plans Department. He is pictured above in the F-15SG cockpit during Exercise Pitch Black in 2018.

Lieutenant Colonel (LTC) Conran Chia's eyes light up when he talks about flying.

"I fell in love with flying from the first flight of my pilot training in Australia," he smiled. "Ever since then, it has been my passion. It's something that excites me, and something that I wake up looking forward to every day."

And where better to spread his wings, both figuratively and literally, than the Republic of Singapore Air Force (RSAF)? Here, he takes to the skies for the highest of causes – to defend our country.

As a fighter pilot, LTC Chia has participated in various missions and exercises. This includes Exercise Pitch Black in 2018, which allowed him to put his night flying skills to the test in a training airspace over 20 times the size of Singapore's.

Beyond the excitement of flying in the RSAF, LTC Chia's career is testimony to how the organisation also offers holistic professional development. He is currently attending the Indonesian Command and Staff College to learn more about the Indonesian military (Tentara Nasional Indonesia [TNI]) and the Indonesian Air Force (TNI Angkatan Udara), and to build networks with local Indonesian officers and other international officers. LTC Chia was previously a Branch Head in the Air Plans Department.

A Passion for the Skies

Even before his first flight, LTC Chia had already been considering a career in the armed forces.

"I live an active lifestyle, crave challenges and like being in the thick of the action. So, the military profession was something that I was naturally drawn to because it promised a highly dynamic environment, and the opportunity to interact with like-minded individuals from all aspects of society," he recalled.

Having made his decision, he started attending career fairs and engaging with representatives from the RSAF. These conversations gave him further insight into working in the military and helped him finalise his decision.

"I decided to sign on with the RSAF because I felt that there was a need to answer to a higher calling by serving the people. Being a pilot allows me to work with people from all walks of life and the RSAF's core value of team excellence resonated with me when I saw how well-qualified individuals from various vocations come together to become an effective fighting unit to achieve any mission.".

"The RSAF's professionalism and culture also felt like something that I would fit well into."

Recognising his passion and potential, the organisation awarded LTC Chia the SAF Scholarship (then the SAF Overseas Scholarship) in 2008.

He was humbled to be given this opportunity to serve the nation. "Beyond the benefits of a sponsored overseas education, the scholarship promised unparalleled opportunities for personal and professional growth, allowing me to hone my skills as a commander, leader, and manager."

LTC Chia pursued a Bachelor of Science (Honours) in Economics at University College London and a Master of Arts in War Studies at King's College London.

Although he studied overseas, LTC Chia is careful to apply his learning to the local context. Hence, rather than just examining a country's military practices, he focused on cultivating mental rigour, broadening his mindset, and analysing conflicts from multiple dimensions – military, diplomatic, social, political, psychological and economic.

Being open to differing analyses is vital in his position as a Branch Head in the Air Plans Department. LTC Chia is responsible for leading a team to develop novel future operating concepts for the RSAF, as well a partner with the greater defence technology community to initiate Research and Development projects that deliver new cutting-edge capabilities for the RSAF.

"The knowledge and experience that I got from the Master's allowed me to analyse conflicts, especially those in our region, beyond just the military lens," he concluded.

"Everyone in the RSAF works together as a team, regardless of rank or vocation, to execute our duties and to achieve mission success." Lieutenant Colonel (LTC) Conran Chia

Growing in the RSAF

He can look forward to more under the RSAF's well-rounded people-development system, which rotates officers through various appointments on a regular basis. This ensures that every RSAF member is constantly learning more about the organisation, challenged to adapt to new environments, and building relationships and teams with new people.

The bonds formed through these appointments have created a people-centric culture, where officers know that someone always has their back. "There's a lot of technologically advanced and capable hardware, but it's the people who form the bedrock of our organisation," said LTC Chia.

"Everyone in the RSAF works together as a team, regardless of rank or vocation, to execute our duties and to achieve the mission."

Come Fly with Me

For those considering the RSAF, LTC Chia has some hard questions: "Do you believe that Singapore is worth fighting for, that our sovereignty and way of life is worth defending? Do you want a meaningful career and are ready to answer the noble calling to serve your country?

"If you do, then come and be part of this professional organisation to safeguard Singapore's skies." 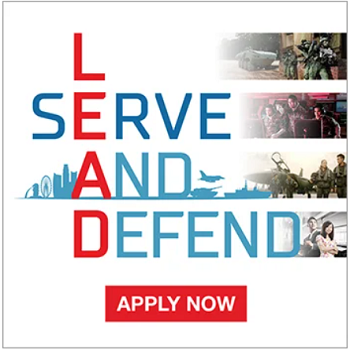