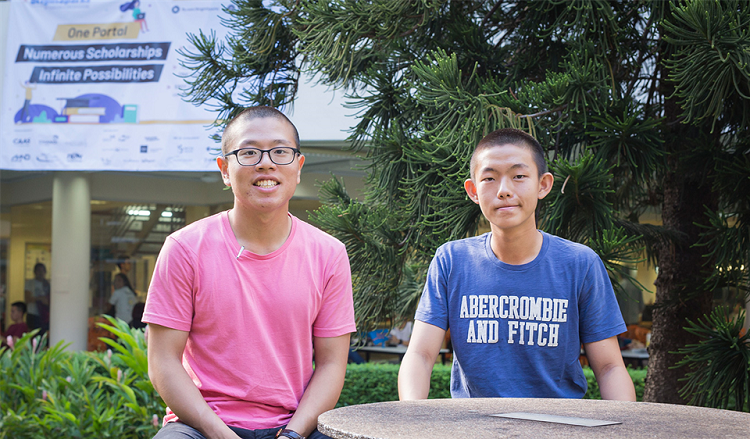 Hard work, perseverance, determination, and a drive to succeed – just some of the characteristics shared by many scholars. Graduates of Anderson Junior College and Serangoon Junior College displayed the uncanny ability to adapt to the changes in their environment as their schools prepared for their merger this year.

As the top scorers from their schools, Ho Jian Feng of the former SRJC and Richmond Sin Jing Xuan of the former AJC share their experiences leading up to the merger, and how the school’s support helped them to achieve their well-deserved results.

As members of the student council, Jian Feng and Richmond played a part preparing for the merger when they helped to plan the orientation for their juniors. This was a first in a lot of ways, and was certainly no bed of roses. Reflecting on the experience, Richmond shares, “At the start, it was definitely hard to work with one another with the differences in culture, but towards the middle of orientation, we managed to put down certain things that we did differently and really came together.”

Jian Feng also counts this among his learning experiences at his JC. While he had not originally planned to join such a demanding co-curricular activity, he was inspired by his house captain and applied for the position. “I realised it was quite fun, and I learned a lot of things like how to guide a group of people, and how to plan things out as a committee.”

Besides their experiences in student council, the boys are also grateful for the guidance they received from their teachers. Jian Feng recounts the dedication his math teacher displayed as a particularly inspiring example. Besides his dedication to students who needed help, his teacher also had a poignant lesson that Jian Feng has truly taken to heart. “Knowing I’m a high achiever, he would motivate me to push harder, and also to help others at the same time. He believed that we should always help others and give back to the people around us, so he was a huge motivator for me.”

For Richmond, the turning point of his time at JC was when his council teacher helped reframe his perspective. “For council, we usually focus more on the task, but he corrected me and told me that the people matter more than the task. He said that it’s only with the heart that one can see what’s essential to the eye, and that’s when I really started looking at the people aspect rather than the task aspect.”

Reaching to the future

Moving forward, Jian Feng intends to pursue a bond-free scholarship. He looks forward to more experiences that will broaden his horizons that will help him decide what he wants as a career in the long term. For now, he’s considering pursuing something related to numbers for his studies, and is interested in finding out more about culture differences in various countries.

On the other hand, Richmond wants to pursue the SAF Scholarship. “I see it as a meaningful career and feel that it’s an essential part of everything we are doing right now. There’s no point in having a growing economy without defence,” he muses as he shares his aspirations for his career. On what he looks forward to with his scholarship, he adds, “I hope that the scholarship will provide me with more opportunities to learn from higher-ranking officers and what they have experienced on their own journey. I look forward to the mentorship that is part of the scholarship.”

River Valley High School’s (RVHS) Integrated Programme (IP) equip, students are with exposed to a holistic education. Over the course of the six-year programme, students enjoy numerous opportunities to grow in areas beyond the confines of the classroom.
Sign up for free!
Enjoy the benefits of BrightSparks!
login / Register »